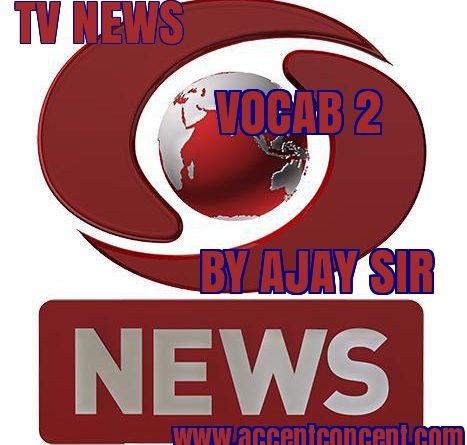 Hello Guys, Here is TV Latest NEWS with vocab 2, The link to the video is provided above and the whole news is written below:

6. Union culture and tourism ministerMaheshh sharma addressing the tourism investors summit (सम्मलेन) in new delhi set government has focused on connectivity especially air connectivity and made a travel within the means of the common man.

7. first advance estimates for 2016-17 released today union Agriculture Minister Radhamohan Singh said that the total is foodgrain production(खाद्यान उत्पादन) estimated at record 13 for 50 points relapse bounces production is estimated that record 8 lakhs 70,000 tons in twenty sixteen to seventeen 8. finance minister Arun Jaitley today inaugurated(उद्घाटन) a seminar on long-term infrastructure financing and best practices for PPP projects in the bricks group while addressing the event in the national capital he says that if India has to grow at seven percent it has to overcome(उभरना) the challenges of infrastructure deficit (घाटा) and how to fund it.

10. Union Railway Minister Suresh Prabhu says the next century will be India century and stress that one should work on it wholeheartedly (जी जान से ) he was addressing (संबोधित)an event at all India management association in new Delhi in the same event and MOS information and broadcasting Rajyvardhan Rathor said that opportunity comes in the way of every nation he called upon (आह्वाहन किया) youth to take maximum advantage of this opportunity.

11. A day after the AAP MLA Amanytullah khan arrest in a sexual-harassment(यौन उत्पीडन) case another AAP MLA Somnath Bharti was today arrested in connection with aiims boundary wall dispute case meanwhile the Delhi Court has granted bail to Amanytullah Khan.

13. The United Nations has said it is ready to resume eight convoy in Syria after halting(slow and hesitant) operations in response (के जवाब में)to a deadly attack(जानलेवा हमला) on an eight mission on Monday.

14. The death toll from the ferry sinking(नाव डूबना) in Bangladesh’s Sundhya River rose to 18, on Wednesday its deep river bank collapsed and huge slab of mud fell on top of an overcrowded(आवश्यकता से अधिक भरा हुआ) ferry while it anchored(लंगर).

15. India have ended their one of the comfort test with 290 runs losing nine wickets against NewZealand Cheteshwar Pujara and Murli Vijay Scored fluent half centuries before the Indian team lost their way Trend Boult and Michael Santner picked three wickets respectively for the visitors.