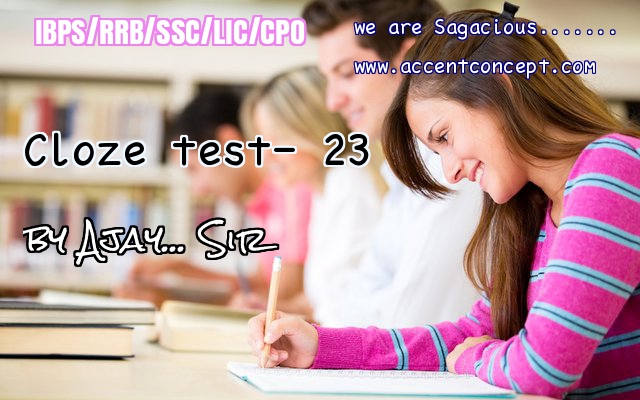 Cloze test with current topics from newspaper by Ajay Sir
Directions (1-10) : In the following passage there are blanks each of which has been numbered. These numbers are printed below the passage and against each five words have been suggested, one of which fits the blanks appropriately. Find out the appropriate word in each case.

Defence Minister Manohar Parrikar made several ….(1)….. statements on the  ……(2)….. of surgical strikes on Wednesday. Parrikar said that the  …….(3)……  government is the first one to carry out surgical strikes and there have not been any surgical strikes in the past. His  …….(4)…….. up the issue after PM Modi  ……(5)……. from speaking on it a day earlier during his Dussehra address. Ever since PM Modi decided to attend the Dussehra event in Lucknow, there were …….(6)…… that he will use the ……(7)……. to speak about the surgical strikes. There were posters of him with Rajnath Singh outside the Aishbagh ground calling them ‘avengers of Uri.’ PM Modi, however, abstained from speaking on the matter, perhaps, in a bid to refrain from politicising the issue. However, Parrikar’s statement made sure the issue remains alive in electoral discourse during the election campaign in Uttar Pradesh.
Parrikar: Credit For Surgical Strikes Goes To Army And 127 Cr Indians Speaking on the same day, Parrikar first  ……(8)……. that he would take part credit but the credit  ……(9)…… to PM Modi for his …….(10)……. action and the army. Then he changed his statement saying the credit entirely goes to Army and 127 crore people of the country and that “we (Parrikar, Modi and the govt) don’t take credit for the operations”.