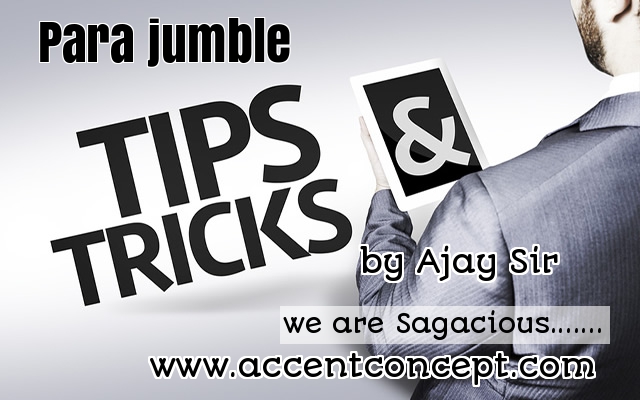 1). Try to find out the topic  addressed by the paragraph. This can be done by looking for the words that are repeated often in the given sentences.

2). If a particular word is repeated in more than one sentence then the sentences can be placed one by one in the paragraph.

3). If a sentence starts with a ‘name’ of a person, then that sentence will definitely be the 1st sentence in the paragraph to be formed

4). If a sentence starts with pronouns other than ‘I’ and ‘You’, then that sentence will not be the 1st sentence of the paragraph

5). The sentences starting with the words ‘That’, ‘These’, ‘Thus’ and ‘Those’ , then those sentences will not come 1st in the paragraph

6). If an article namely ‘a’, ‘an’ or ‘the’ is present at the starting of a sentence. Then the chances of that sentence to be the 1st in the arrangement is more

1. Try to understand the main idea or theme of the passage, once the theme is identified then the sentences can easily be put in order.

2. Find mandatory pair by linking the two sentences. Try to locate the first or the last sentence which is sometimes very easily identified.

3. Generally the first sentence will introduce the theme of the paragraph and will not begin with a conjunction like because, so, but etc.

4. Transitions words and linking words sometimes help to put the sentences in an order. Look for the TRANSITION WORDS. Transition words are used to connect one idea to the next. They facilitate the reader to flow more smoothly from one point to the next. Carefully observing the transition words will give you a clue of sentence that leads or follows the sentence containing transition word. Some of the most important transition words to observe are : also, again, as well as, besides, furthermore, in addition ,likewise, moreover, similarly, consequently, hence, otherwise, subsequently, therefore, thus, as a rule, generally, for instance, for example, for one thing, above all, aside from, barring, besides, in other words, in short, instead, likewise, on one hand, on the other hand, rather, similarly, yet, but, however, still, nevertheless, first of all, to begin with, at the same time, for now, for the time being, in time, later on, meanwhile, next, then, soon, the meantime, later, while, earlier, simultaneously, afterward, in conclusion, with this in mind, after all, all in all to sum-up.

5. The whole paragraph should have a smooth flow once the sentences are arranged.

7. Look for Cause and effect. Look for words or phrases explicitly indicating that one thing causes another or logically determines another.
Accordingly in order to because so…that consequently therefore given thus hence when…then if…then etc.