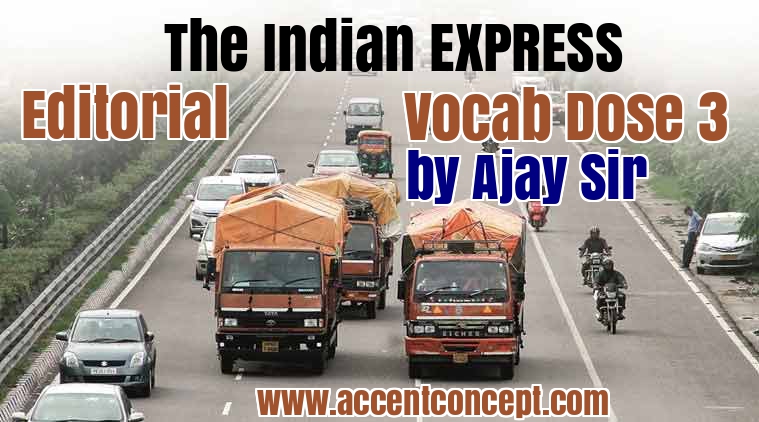 Deadlines help. Hard ones help even more. After all, years of false starts have turned the goods and services tax (GST) into the boy who cried wolf. Let alone some corporates and auditors, even part of the general government machinery does not seem fully convinced that April 1, 2017 is a realistic start date. For the tens of millions of people who need to prepare for this transformational change, there is nothing like a hard deadline, akin(similar,के समान) to a hanging sword, to focus attention. And that will be needed, for if passing the GST constitutional amendment bill was tough, the steps going forward to get the GST started are likely to be much tougher. We highlight the four major ones here.

The first step: Should we have one standard rate or ten? A large number of rates can distort supply chains and complicate administration as well as compliance, introducing undesirable discretion(sense,विवेक) in the system. At the same time, just one standard rate may be inappropriate because currently each of excise (a central levy) and (state) sales tax schedules has a low band (4-6 per cent) and a standard one (12-14 per cent).

This is to offset the regressive nature of indirect tax: For instance, when buying shampoo, the factory worker and the CEO pay the same sales tax. Items presumed to be consumed by the poor fall in the “low” category, and those by the rich in the “standard” category. So biscuits below Rs 100/kg have zero tax, those priced higher have a low tax rate and cream biscuits get the standard rate. Half of India’s consumption basket currently has zero tax, a third is taxed at a “low” rate, and only 15 per cent is taxed at a “standard” rate. Applying one rate would mean this nuance is lost, and inflation could rise for the poor.

Thus one needs a “low” rate and a “standard” rate. Then what explains the four-rate structure (8 per cent, 10 per cent, 18 per cent, 26 per cent) being proposed to the GST Council as reported in this paper? It could be an attempt to replicate the current tax structure to address the states’ primary concern about losing revenue.

That brings us to the next and what could be the most critical step for the GST: Mapping the hundreds of product and services categories to the few GST rate slabs. It could be a trivial(small.तुच्छ) exercise accomplished in a few weeks, but it should not be. Despite much simplification since 1991, the schedule of taxes remains highly complex and distorts supply chains. Some rates also embody efforts to incentivize(encourage,प्रोत्साहन) “Make in India”: A hurried mapping effort could hurt. A senior OECD economist recently asked: “What is the commerce ministry’s assessment of the impact of GST on India’s trade competitiveness?” I had to tell her with much disappointment that such an exercise in all likelihood had not been undertaken.

The costs of commencing(start,शुरुवात) a major simplification of rates are the time it may take, the one-time disruption, and getting all states to agree to a completely new rate schedule. That said, getting states to agree will be challenging anyway, as sales tax rates already differ meaningfully across states (for instance, biscuits in Gujarat attract 8 per cent sales tax but 14.5 per cent in Karnataka).

The third step would be the GST law itself. Enormous(large,बड़ा) effort has gone into the draft bill put up for public comments as state and Central bureaucrats hammered out a consensus(agree,सहमति). But now that it has started to see public scrutiny(examine,जाँच), the list of necessary changes is growing rapidly.
This is not surprising, given the massive number of new use cases thrown up, particularly as services are to be taxed at the state level (for instance, who should get the service tax on an ad campaign designed in Mumbai but run in UP, Karnataka and Telangana?). A draft of the IGST law, which will deal with contentious inter-state transfers, has not been made public yet. A hurried passage may be inappropriate.

one of the most important expected gains of the GST is improved compliance.

But without a simplification of the compliance process, this improvement could prove illusory: One senses this design intent has been lost. As Bharat Goenka of Tally Solutions pointed out, small enterprises are concerned about the complexity of compliance more than the cost of the tax itself — that is, dealing with the day-to-day maintenance of registers and sometimes with corrupt officials. Easier and possibly automatic filing of returns is likely as important as the invoice matching that is expected to widen the GST tax net.

The fourth step is the software and its rollout. One assumes this is well advanced. However, development can only stop and implementation and training can only start once the rules of the GST are finalized, that is, encoded and passed in every state and the Centre. Vendors of enterprise software like SAP also need to roll out their GST modules, and they cannot do so till the GST software is finalized. All this as the organizational structure in the government(s) itself would be changing.

It is clear the choice is between time and perfection. There is very little time left: Clarity on rates must emerge in the next few months for the next year’s budgets. Moreover, the rollout cannot be too close to the 2019 elections: Economic disruption due to the GST can be minimized, but not obviated(escape,बचना). Further, prices of some items may rise, and for others, may fall: The items that see increases could become poll issues.

It is tempting to think of the process as an incremental one: Get the economy into the GST mode first, and later simplify the tax rates and ease the compliance burden. However, the best time to make structural changes is when a new system is starting; making them later risks creating a patchwork that can never be as efficient. As the GST Council’s internal politics evolves, it may become tougher, not easier, to build consensus on structural changes. As Pratap Bhanu Mehta has said in these columns, the GST is a “constitutional adventure”: Who really owns the GST schedule? The Central government is not the sole driver now and must take the states along.

Perhaps a middle-path exists. A handful of task forces working in parallel over four to six months could make the whole plan much more considered. A senior bureaucrat appointed to the GST secretariat and put in charge of the whole GST project could improve coordination. It could also help build the necessary conviction among those who need to contribute to the change — deadlines that seem implausible(impossible,असंभव) hurt that conviction.