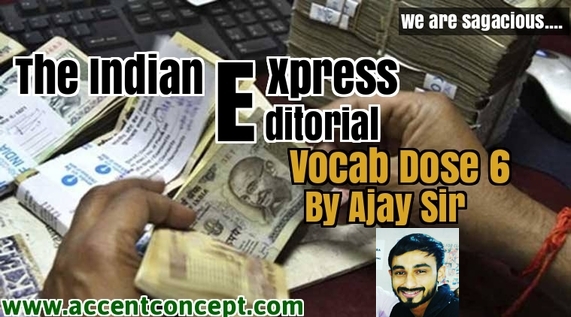 The Income Declaration Scheme (IDS) announced in the 2016-17 budget closed on September 30, after remaining open since June 1. The finance ministry has announced that 64,275 people have come forward to declare Rs 65,250 crore of black money. This is the largest amount declared as black money in the history of Indian taxation. Naturally, the government claims this to be a big achievement, more so since the response in the first three months was tepid(slow,मंद).

The average amount of black income per declaration is about Rs one crore. This is indeed low when there is daily news about people being caught with hundreds of crores of rupees of black incomes. It is likely that either the big earners of black incomes have not come forward or declared a negligible part of their black money. It is reported that the income tax officers pressurized people under their charge to make declarations in the last three weeks. So, either they coerced(forced,मजबूर) the small fries or the big fellows declared a minuscule(small,छोटा) amount. Also, many of the black income earners do not pay any tax. So they do not come under any income tax circle and, therefore, would not have been under any pressure.

The last disclosure scheme was announced in 1997 — the Voluntary Disclosure of Income Scheme. Under it Rs 33,000 crore was declared and tax of about Rs 10,000 crore was collected. The 2016 scheme is also a “voluntary” program, even though it is not called that. The 1997 scheme was called an amnesty scheme because of the low tax that had to be paid. But this time, it is not referred to as an amnesty because a higher rate of tax is being charged. The government had also given an undertaking to the Supreme Court in 1997 that it would not initiate any more amnesty schemes. The reason being that an amnesty scheme is unfair to the honest taxpayers while those evading(remain,बचे) taxation get a concession for declaring their past income.

From the black incomes generated every year, a part is consumed and the rest saved. Over time, the accumulated savings become much larger than the annual income. For the rich, the savings from incomes are high, so the black wealth accumulated(gather together; to collect संचित) is much larger than their annual black incomes. Data suggests that only a small part of these black savings are declared under the amnesty/declaration schemes. Thus, barely 0.2-0.3 percent of the black wealth has been declared in the 2016 scheme. The number of declarations in 1997 was over four lakh; now, surprisingly, it is a sixth of this number. The number of businesses, professionals, corrupt officials and politicians has risen over time. So, the number of people with substantial black incomes and wealth should have been several times the number in 1997. Even if it is assumed that the top one percent of the population generates substantial black incomes, the numbers should have been close to 13 million.

The government has announced that it would not reveal any of the data collected through the scheme to any agency; not even the CAG. This is strange since CAG is a statutory body with powers to audit the accounts of the government. It is the CAG that pointed to the various infirmities in the 1997 scheme. Giving data to the CAG does not violate any confidentiality.

It needs to be assessed whether those declaring their black incomes are doing so correctly. They could be miss declaring their recently purchased gold as that bought 20 years ago at one tenth the cost and thereby turning 90 per cent of their black wealth into white. Only an assessment by an independent auditor will help unearth such manipulations.

There can be several reasons why the IDS has garnered(collect,इकठा) much less than it should have. If “round tripping” can be done at five per cent to 10 per cent of the amount of the funds, why pay 45 per cent under the IDS? Further, if the government, promises not to resort to vigorous(healthy,जोरदार) pursuit of businessmen — under “ease of doing business” — they may be under no pressure to come clean. A person who has hoarded black wealth can only be caught in a raid; such a person will not declare black wealth voluntarily unless there is a cost to not declaring. The “success” of the IDS scheme in the last three weeks also suggests that if the income tax department applies pressure, black money can be unearthed. The government seems to be trapped between unearthing black money and not applying pressure on businesses. Why this dilemma(uncertainty,दुविधा)