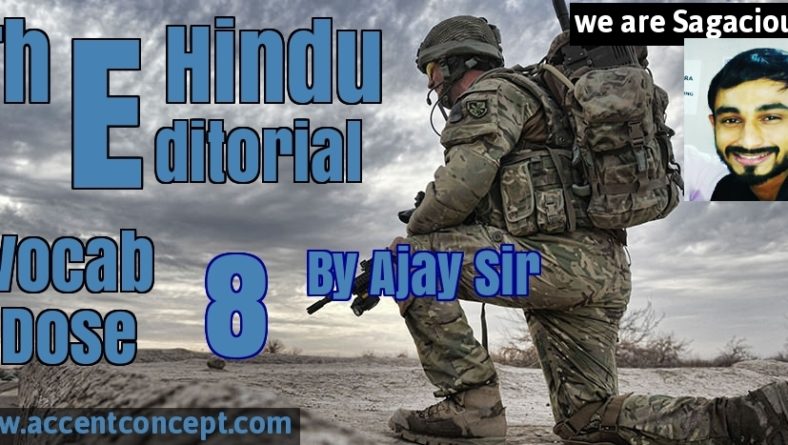 Ajay Sharma Sir is a well-known name among young students who is One of the youngest and Best Faculties of English in Hisar (Haryana) For All type of competitive Exams. He is known for his Amazing Teaching Techniques so students & he also call himself
“An Amazing Angreji Adhyapak At Accent Hisar”
His Teaching Techniques are Fabulous(…Has been awarded for Best Teacher Award on 5 Sept. 2016)………
He teaches students using his Amazing Techniques and Tricky Methods based on left brain….

In 2004, the world saw evidence of one of the most horrific acts of torture and sexual abuse by an army of captured prisoners. The soldiers did not belong to the army of a banana republic(Banana republic or banana state is a political science term used originally for politically unstable countries) or a military dictatorship(absolute rule,तानाशाही) but to the U.S., a democracy. The prisoners were Iraqi, held at the Abu Ghraib prison.

At present, India is going through a staggering(unstable,विचलित) phase of amnesia(memory loss,भूलने की बीमारी): that it is a democracy. War clouds have caused a flight of reason. The valorization(value,मूल्य) of the Indian military after the “surgical strikes” has culminated(highest,पराकाष्टा) in a perverse(distorted,विकृत) logic amplified(enhance,बढ़ाना) by a shrill media: you cannot question the government on matters military as it is equivalent to insulting the army, which itself is beyond scrutiny(examine,जाँच) and reproach(insult,तिरस्कार).

The question here is not of the veracity(reality,सच्चाई) of the surgical strikes but whether questions can be asked of the government and the army. The logic that answers in the negative is one that suits a military dictatorship, not a democracy.

If this logic held, we would have never known how the American and British governments led their people to the catastrophic(destructive,विनाशकारी)Iraq war over flimsy(weak,कमज़ोर) reasons of national security. The Abu Ghraib expose too would have never seen light. Nor would have our own Kunan Poshpora. That such logic shows a tendency towards the militarisation of society, especially now when an aggressive nationalism gains ground.

Witness the closing of public mind since Uri and the surgical strikes. Actors are facing a public outcry either for “disrespecting” soldiers or for “supporting” Pakistani artistes. Parties are being condemned for demanding “proof”. And farcically(laughable,विनोदपूर्ण), television guests are thrown off studio debates for speaking over martyred soldiers’ fathers. The army, in essence, has become a holy cow.

This is a dangerous tendency, for the militarization of society and the predominance(supremacy,प्रबलता) of militaristic values is opposed to some fundamental tenets(belief,सिद्धांत) of democracy like critical thinking and questioning of hierarchy. Militaristic values are also intrinsically(internally,आंतरिक) connected to notions(opinion,मत) of hypermasculinity(bravery,बहादुरता). Of course, unquestioning obedience is useful in the institutional context of the army and in limited situations of war, but it cannot become a general value of society for all times.

More crucially, militarisation fundamentally obfuscates(unclear,अस्पष्ट) society’s real problems. Fear becomes the basis of society, and a soldier’s job becomes the most important occupation. People who clean the sewers with no protective equipment, and at great threat to their lives, do not, in this narrative, serve the nation. As the writer Aakar Patel asks, why are sewer cleaners, dying in the hundreds, and sanitation workers not considered martyrs?

The tragedy of a dead soldier is justifiably commemorated by all. But millions die unsung, performing jobs in hazardous(risky,जोखिमपूर्ण) conditions. The precariousness(uncertainty,अनिश्चितता) of soldiers on the Siachen Glacier has rightly sympathized with, but not the horrors of manual scavengers who have to handle human feces and die due to diseases.

Shouldn’t there also be outrage(anger,गुस्सा) over men carrying their dead daughter and wife on their shoulders because hospitals refused ambulances, as was the case in two separate incidents in Odisha? Where is the outrage and TV coverage about the 1.2 million (preventable) child deaths in India last year, the highest in the world? How does this number compare with deaths caused by terrorism? For society’s well-being, should this not be the most important problem exercising discourse?

Ironically, a militarized society despite valorising the soldier does not actually speak for him/her. Warmongering[ practicing warmonger(a person who encourages or advocates aggression, युद्ध की आग भड़कानेवाला)] could only lead to the deaths of more soldiers. While Kargil and its 527 war heroes entered India’s military folklore, Operation Parakram, and its 798 dead soldiers are little discussed by the public. How is it justifiable to lose nearly 800 soldiers without even fighting a war?

Further, in every violent conflict like Uri, the overwhelming numbers of the dead are sepoys and non-commissioned officers hailing from the most marginalized strata of society. It is a tragedy at many levels.

The valorous(brave,बहादुर) soldier versus the pusillanimous(coward,कायर) civilian and the patriotic soldier versus unpatriotic civilian are false binaries on which a militarised society thrives(grow,पनपना). On the one hand, defence arms procurement, and land and recruitment scams show the involvement of both higher echelons(group,टोली) of the military, and civilians (politicians and bureaucrats). On the other, what unites both is that tragic(दुखद; भयंकर ; fierce, awful) social conditions are disproportionately shared by the soldiers and civilians from the poorest and most oppressed groups, especially the costs of war. After all, the shrieking(ज़ोर से चिल्लाना, scream) TV anchors and the elite(specific,विशिष्ट) civilian classes wanting a war are not the ones fighting the war or are among the 15 lakh people forcibly evacuated from border village homes and living in makeshift camps.

The valorisation(to assign value, मूल्यवर्धन, मूल्यस्थिरीकरण) of the military in a democracy is ironical. Ultimately, what is the military fighting for? Is it merely Indian territory? The military, while protecting the nation, does not dictate India’s constitutional values. By conflating(to combine, मिलाना) into one) the two, a fundamental mistake is made. In the eyes of the world, what distinguishes India from Pakistan is not that it has a bigger military, but that it is a settled, even if flawed, democracy. The Indian Army is different from the Pakistani Army because it is, ultimately, under the control of the people.

Every public institution, including the military, has to be subject to public accountability and scrutiny. There is no maxim in a democracy that says you cannot ask questions of its army.

Similarly, striving for non-violent resolutions is not being anti-national. An army veteran writes: “It’s easy to ask for peace when you are a thousand miles away from the Line of Control.” This is why soldiers facing bullets at the border are not the ones in charge of public policy in a democracy. As Onkarnath Dolui, who lost his son in Uri, painfully pleads, “Believe me, I don’t want war as it demands countless of lives, like that of my son, on either side.”

Soldiers and their sacrifices deserve respect in society, but they cannot overwhelm every other aspect of society. Military fables have their place, but they cannot substitute democratic debates. While we mourn the deaths of soldiers, we have to understand that poverty is the biggest killer in India, by a million times over. A militarized society prevents us from seeing that.