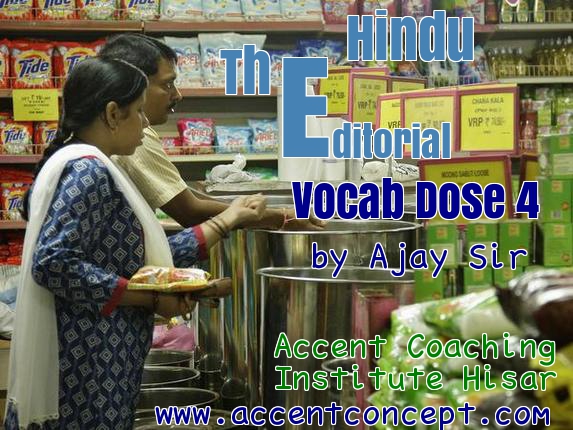 A landmark meeting of 33 people is currently underway in New Delhi. This is the meeting of the newly constituted Goods and Services Tax (GST) Council, comprising representatives of the 29 States, two Union territories, and the Finance Minister along with his deputy. The GST Council will lay the foundation for the future of India’s cooperative federalism. Can a nation with an extremely diverse and dissimilar set of States amicably(friendly,सौहार्दपूर्ण) transition to a ‘one nation, one tax’ GST regime is the $250 billion (of indirect taxes) question.

The GST Council has a minister representing the median 30-year-old matriculation-educated Tamilian, earning roughly Rs.1.4 lakh per annum. It also has a minister representing the median 19-year-old primary school-educated Bihari earning a mere one-fourth of her fellow Tamilian. The Finance Minister of Maharashtra representing one-seventh of the entire country’s GDP will attempt to strike a fair deal on equal terms with the minister representing Sikkim with less than 1 per cent of Maharashtra’s GDP! Neither the European Union nor the United States nor even China exhibit(show,दिखाना) such stark contrasts in demographics, human development and economic parameters across their large provinces as India. In this context, this transition to a uniform GST regime is both extremely audacious(brave,साहसी) and laudable. Reconciling diverse preferences of all the member States of the GST Council to determine a uniform set of indirect taxes across the nation is a ‘Mangalyaan’ task. But it is possible to accomplish this mission by adhering(follow,अनुकरण) to some basic guiding principles. We present below a five-point thematic framework for the GST Council. But first, it is essential to remove some misplaced notions(belief,मत) around GST.

One, the revenue neutral rate (RNR) is a utopian(imaginary,काल्पनिक)chase. It is best to acknowledge (accept or admit the existence or truth of;स्वीकार करना) that under a new GST regime, it is impossible to predict how tax collections will be in the short and longer term. It is futile(useless,व्यर्थ) to agonise(pain,व्यथा) exact rate at which there will be no loss of tax revenues for all the States.

Two, fear of loss of revenues to large States due to a lower GST rate is exaggerated(overstated,अतिशयोक्ति). Large States can also benefit from a significantly higher share of service tax revenues to their kitty under the destination-based GST regime.

Three, it is a false notion that high GST rates will not affect the poor since half of the consumption basket is not taxed. This assumption, that the government knows precisely(clearly,स्पस्थ्तया) what the poor and rich consume, is bizarre(weird,अजीब) and outdated. The government decides that regular biscuits is an ‘essential’ good and is not taxed while cream biscuits is a ‘luxury’ good that is taxed at the highest rate. Meat may be a ‘non-essential’ food item for the poorer Bihari but ‘essential’ for a richer Keralite. Given India’s stark economic diversity, there are no uniform standards for the poor across the country.

The five guiding principles for a possible consensus(agreement,सहमति) on GST:

One, forget RNR, instead guarantee a minimum for each State: States are bound to be apprehensive about potential revenue losses in this transition to a GST regime. The leaders of these States have budget commitments to keep and elections to fight. Guaranteeing the States a minimum amount of GST revenues will relieve them of the risks of tax buoyancy(boom,उछाल). Every State can be guaranteed a minimum combined GST (Central and State GST) revenues for a period of five years or a State election, whichever is earlier. This minimum revenue formula should include all of the State’s 2015-16 non-petroleum, non-sin goods indirect tax revenues.

We acknowledge that a guaranteed revenue stream and a minimum GST rate can be potentially hazardous(dangerous,खतरनाक) to the Centre’s fiscal situation. In the impossible trinity of keeping rates low, reimbursing States and keeping fiscal prudence, it may be worth relaxing fiscal discipline, as an investment into the future of a smooth functioning GST.

Three, no more State-specific tax incentives; increase threshold for exemption: Different States have different thresholds under which businesses are exempt from State taxes. Typically for large States, any business with an annual turnover of less than Rs.10 lakh is exempt. Since a uniform GST will remove the States’ ability to attract new businesses with tax incentives, there is an understandable fear of new job creation in the more developed States. Raising this threshold for GST exemption from the current average of Rs.10 lakh to, say, Rs.40 lakh can incentivise existing small businesses to grow faster, thereby creating new jobs. While outwardly, this may seem unfair to the smaller States, they may actually stand to gain in the longer run as this can attract larger businesses to smaller States where land and labour are ostensibly(seemingly,प्रकट रूप से) cheaper.

Four, minimal categories of exemption: Petroleum and petro products along with sin goods such as alcohol and tobacco are already exempt from the current GST law, allowing States to levy appropriate taxes on these goods. With a guaranteed minimum GST revenue for each State for a certain period and an overall low GST rate, it is in both the interest of the States and the Centre to then not allow for any more goods or services to be exempt from GST.

Five, incentivise States for GST collection: The key to a successful GST regime is increased tax revenues to States failing which it is bound to get fractious(uncontrolled,बेलगाम) in the years to come. Since GST is a destination tax concept, it is best to give each State the greater responsibility to collect both Central and State GST taxes within its State. The more the States collect, the more they get back.

It took three years post-Independence for the Constituent Assembly to draft the Constitution of India that has remained the edifice on which the Republic of India still stands firm. The GST Council has a similar weight of responsibility in cementing the economic unity of India on a seemingly shaky pluralistic foundation. It is an onerous(heavy,भारी) task that deserves debate, discussion and consensus.